Leicestershire has been in the spotlight lately music-wise, with Clarendon Park locals Kasabian headlining Glastonbury and X Factor winner and Leicester City fan Sam Bailey reaching number one in the UK Album Chart. Add singer-songwriter Molly representing the UK in the Eurovision Song Contest to the mix, not to mention Sally Barker making Tom Jones cry on The Voice, and it seems like all heads are turning to the county’s musical talent.

Leicester’s live band scene is thriving too. Jamie Pelos, lead singer of local band The Clarendons says, “It’s a such a great time to be a live music fan in Leicester – you can go out every night of the week here and see a different and really accomplished live band at a different local venue every time.”

Drummer Keith Witchard agrees, “There have always been plenty of great venues in Leicester, and no shortage of good bands, but it does feel like there’s been something of a renaissance lately, There’s a real excitement in the air and with so many local bands and singers achieving national acclaim there’s no shortage of inspiration for young musicians in the city.”

The Clarendons is a four-piece band with a long history. Keith met guitarist Will Sarson at school in Hamilton and their first high-profile musical collaboration was in Perfect July. This popular indie band produced some dazzling tunes, and continues to be fondly remembered today. Following the break-up of Perfect July in 2005, Will and Keith knew they wanted to continue making and playing music together, but it was some time before Will met Jamie through work and he joined the duo, bringing his talents as a lyricist and a hefty dose of youthful enthusiasm. A protracted search for bass player began, and in July 2013 Chris Smith joined the fledgling band and a fresh start with a new name was in order.

Jamie says, “I did make some pretty exotic band name suggestions early on, but then we decided we wanted a name which had local resonance. We all lived in the Clarendon Park area, and in the end the simplicity of The Clarendons just jumped to the forefront.” 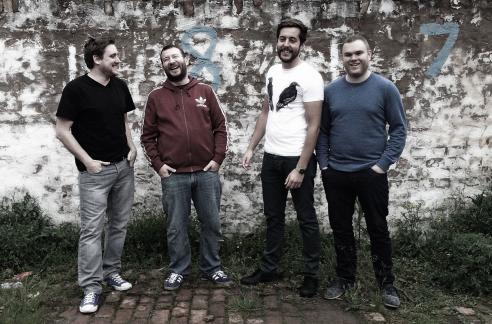 We’re in The Clarendon pub and the four band members are in typically jovial form, full of banter and mutual mickey-taking. Will is flitting between his pint of cider and the fruit machine, while the rest of the band chill out on the leather sofas with pints and bar snacks. It’s a fitting location for us to meet, and the four are quick to talk about their love of Clarendon Park.

Jamie, who lives on Hartopp Road, says, “I think this area is very diverse – everyone who lives here has got a quirk. It’s like a little village and it’s got a deep history of eccentricity. We’ve got mad professors, progressive artists, hipster students – it’s all a bit offbeat and unconventional and that makes it a really lively place to live.”

Will agrees: “I think what summed it up for me was when I was in Babelas the other night and there was a group of university lecturers sat around one table playing gin rummy, what looked like a bunch of rowdy students in the window seats, a very well dressed older couple at another table sharing a cheeseboard, Tom from Kasabian at the bar – and you look around and you think ‘what’s the demographic of this place apart from everything?!’ It’s such a unique part of the city and I think the crucial thing is that everyone who lives here is genuinely proud of living here.”

The eclectic nature of The Clarendons’ music, which spans a range of genres and lends itself equally well to electric and acoustic sets, echoes the diversity of their home ‘burb. It seems apt that the boys are unwilling to neatly pin down their musical style.

“I don’t like to give it a title,” Jamie explains, “We have some heavy songs, we have some slow songs, we have happy songs and sad songs – the whole spectrum. Our influences are hugely varied too, but personally I often take inspiration from Johnny Cash, Biffy Clyro and The Small Faces. There are western influences in a few of our songs too, some that you might classify as love songs, a few heavier, more rocky numbers, and even a sea shanty.”

While Jamie is the chief lyricist, the band members generally take a collaborative approach to writing the music for their tracks, many of which are crafted in Will’s ground floor music studio on Southernhay Avenue. Of the dozen or so polished songs that make up an average set there are a few that the group are particularly proud of – Early Evening Sky, Lover’s Garden, The Castle and Mother of Pearl top the list.

Will describes Early Evening Sky as, “A technically great song – it builds really well and it’s quite intricate.” He goes on to cite the band’s most recent song, Lover’s Garden, as his personal favourite, “That song sounds like summer to me, lovely and positive, and I really enjoy playing it.”

My own favourite track is audience-pleaser The Castle. This unashamedly upbeat ditty has a tune so catchy anyone hearing it is likely to be humming it to themselves for days afterwards. It has proved more popular than any of the group anticipated.

“Everyone who hears The Castle seems to love it,” Jamie says, “It’s a happy song, but it’s different as well. People sing along to it even if they don’t know it. Yeah – I think we should be proud of that song.”

Despite their relatively short history, The Clarendons have been quick to pick up plaudits. John Wray, writing for Music in Leicester, said of their January obsUnplugged gig at The Musician: “Their honest, unpretentious set was a perfect end to the evening.” He added that “Mother of Pearl was arguably the best song on display all night,” and described the band as, “Definitely ones to watch in a night full of bright talents.”

The group has also gained recognition for their understated but playful stage presence, which has been honed over the last year with performances covering the gamut of Leicester’s most high-profile live music venues. Firebug, a bar and live entertainment venue on Millstone Lane in the city centre, is a particular favourite.

“I’ve got some really fond memories of playing Firebug with Perfect July,” says Will, “So returning there with The Clarendons felt a bit like a homecoming and was really good fun. It’s a very atmospheric venue with a good stage and great acoustics.”

Other gigs have been even closer to home – the group are regulars at the Stoneygate festival events and Clarendon Park fairs. These uber-local performances have a special resonance, with Jamie describing them as “home gigs.” The band’s December 2013 set in Bar Dos Hermanos, on a makeshift stage in front of a packed crowd of local folk, was one of their most memorable.

With Leicestershire’s musical talents in the spotlight and its biggest city’s live music scene on the ascendancy, it seems there has never been a better time to start a band. What advice does the group have for aspiring young musicians?

Keith agrees, “It’s so important that you enjoy what you do and trust your instincts. Make the music you want to make and don’t try to copy another band’s style in an attempt to recreate their success.”

With some practical advice for fellow songwriters, Jamie adds, “Write as many songs as you can – say for every forty songs you write there’ll be ten stonkers in there and you can easily put an EP together. Just keep writing and experimenting with different sounds.”

Chris, maintaining his reputation as the eccentric of the band, makes the surreal suggestion: “Eat quorn mince.” Entirely irrelevant to our conversation this may be, but as it was pretty much his sole contribution during my interview with the band, I feel compelled to include it. Who knows – maybe this advice will prove invaluable to aspiring bassists!

A band of the times

Promotion is an important aspect of growing and maintaining a loyal local following as a band. What guidance does the group have for young bands looking to make their mark?

Marketing graduate Will is well-placed to offer advice, and says, “It’s all about social media right now. When I started with Perfect July the emphasis was on getting a CD together. We used to spend huge amounts of time sending CDs out with bits of paper and it was a real pain in the arse. I also remember hanging around outside venues for hours handing out flyers. Now you can do just about everything electronically and it means you can find other people’s music easily as well as get your own out there.”

“We’re a band of the times,” says Jamie, “We’re using social channels because that’s what people are using these days. It’s great because it’s a really easy way to fit promotion around work and social events.”

Asked to identify one young Leicester band destined for great things, the group all agree on six-piece reggae band By the Rivers.

Jamie explains, “They’re already pretty big to be honest, but I reckon they’re about to get seriously successful. They’ve got such a distinctive sound, which is something we admire and aspire to – you can hear a song and you immediately know it’s By the Rivers.”

“They’ve made a huge impact already,” agrees Will, “They’re only about twenty years old so they’ve got their whole future ahead of them, but they’ve already got a really mature sound.”

By the Rivers are performing at Glastonbury this year. The Clarendons have no such lofty ambitions, being content, as Jamie puts it, to be “recognised as a good band within the Leicester scene.” This humbleness and desire to stay close to home is reflected in their love of local gigs and their growing audience of loyal and enthusiastic Leicesterites.

The Clarendons consists of four very different musicians who together have created an individual brand of clever, quirky, consistently catchy music. With a laid-back sound inspired by myriad influences, and a jaunty yet unfussy performance style, the band is an apt metaphor for the idiosyncratic little corner of Leicester which inspired its name.

See The Clarendons live at their next gig on the main stage at the Clarendon Park Summer Fair on Sunday 15 June 2014. For more info and links to recordings of their songs visit their Facebook page.