A few weeks ago I wrote the first of my Sweet Treats articles – selflessly trawling the streets of Clarendon Park in search of the best sugar-boosting take-away bites on offer. I visited The Tiny Bakery, Christopher James Deli, Fingerprints, Andersons’ Sweets and Ice Cream, Green and Pleasant and Salvador Deli. It was tough. I had to eat a lot of cake.

In this little sequel we’ll take a look at The Secret Tea Room, which has opened since my last Sweet Treats post, and Jones’, which embarrassingly slipped under my radar last time.  Stick with me sweet-toothed readers, and get bang up-to-date with your knowledge of Clarendon Park’s best purveyors of tempting morsels.

The Secret Tea Room on the corner of Clarendon Park Road and Lorne Road has been open for less than a month but has already gathered something of a cult following among Clarendon Park’s hipster community. This bijoux cafe has really captured the retro zeitgeist with its vintage crockery, old-fashioned cake stands and chintzy decor.

With just four tables inside, there’s not much room for manoeuvre, but this all adds to the feeling of exclusivity. It’s easy to imagine you’ve been transported back to a simpler, more gentile age as you sip tea from your vintage teacup in between nibbles on your finger sandwiches.

Manager Steph Coles explains that the new enterprise is very much a family affair: “My partner owns the building,” she says, “My daughter lives above the shop, she’s just become a mum but she’s hopefully going to be helping out making the cakes when she’s got a bit more time on her hands.”

The building used to house Bridal Boutique, a wedding shop. The front half of the plot is currently rented out to PLANK (more about that here) with the smaller rear room becoming The Secret Tea Room.

“We’re hoping to be able to open up the little courtyard garden round the back soon,” says Steph, “Which will effectively double the capacity of the place.”

It’s the afternoon tea which is the real tour de force at The Secret Tea Room. Utterly traditional in style, the components are served on a three-tiered cake stand and include finger sandwiches, scones and cake, accompanied by a pot of tea. At less that £20 for two people it’s excellent value considering what’s included, and if you don’t manage to finish everything your leftovers will be packaged up for you to take away. 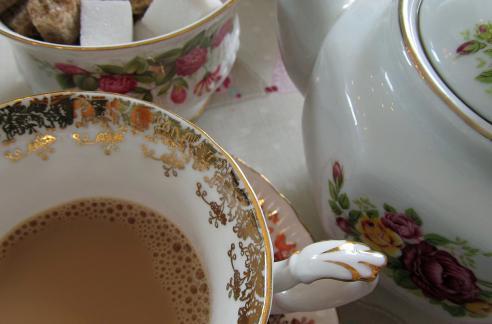 Steph bakes the scones herself, while the tea room’s cakes are freshly made by a small-scale local supplier. Quality is clearly a high priority, “There are no preservatives in any of our cakes,” says Steph, “And all the eggs we use are free range.”

In such a traditional little venue it seemed apt to sample a traditional cake, so I opted for a slice of classic victoria sponge. It is everything you’d want it to be – deliciously sweet with a generous amount of cream and jam, all surrounded by some perfectly moist, light sponge.

Also available, either to eat in or take away, were the heartily-sized scones, an indulgent looking chocolate cake, carrot cake, and a selection of little cupcakes.

Steph is particularly enthusiastic about the carrot cake, saying, “People say it’s the best carrot cake they’ve ever tasted – we don’t know how she does it. The icing is like nothing anyone’s ever had before.”

If that’s not a good enough reason to head over to The Secret Tea Room, I don’t know what is.

Jones’ Cafe Bistro is a well-established Queens Road eatery serving great value food in a relaxed and friendly atmosphere. The owner’s American roots account for the fact that much of the menu wouldn’t look out of place in a US diner. The generous breakfasts, bagel burgers and deli-style sandwiches will already be familiar to many of you, as will the commitment to competitive prices which makes Jones’ such a popular haunt for Clarendon Park’s student population.

The excellent selection of homemade cakes on offer in Jones’ seems to be less well known, perhaps because the size of their portions means that no-one has room for dessert. Luckily, all of their cakes are available to take away as well as to eat in. The choice is impressive, with at least half-a-dozen different cakes available every day and an ever changing medley of imaginative flavours, all priced at £1.50. 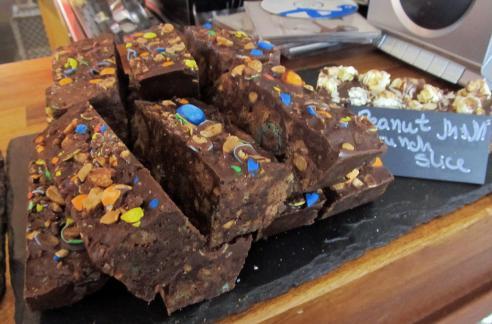 James, who works in the cafe, tells me that the most popular cake is the chocolate biscuit slice – a brownie-style offering with big chunks of crumbled up cookie mixed into it. Other more exotic offerings include the popcorn brownie and the peanut M&M crunch slice.

“We also make our cakes into sundaes,” says James, “You pick the cake you want and we mix it into a bespoke sundae for you.”

Having just eaten my own weight in waffles with strawberries, ice cream, cream and maple syrup, I opted to take a cake away to nibble on later. I went for a crispy marshmallow slice, which consisted of of bits of toasted rice in a gloriously squidgy brownie mix with chucks of marshmallow stuck on top. It was unglamorously indulgent and the perfect mid-afternoon pick-me-up.

If you haven’t already read the first Sweet Treats article, you’ll find it here – all you need to get yourself bang up-to-date with Clarendon Park’s best sugar boosts!