Yesterday saw the opening of Cats, Cakes and Coffee on Francis Street – and I was one of the first though the door. Keep reading for the first ever review of Leicester’s first ever cat café.

October 2015 update: The reign of this feline-themed eatery was a brief one. Cats, Cakes and Coffee closed after a couple of months following a pretty dire hygiene rating from Leicester City Council. Dominic Shellard, university bigwig and amateur cat psychologist, really twisted the knife with a tweet in which he said that the “cats looked very sad” and the whole place smelled of poo. RIP CC&C.

It’s a scientific fact (probably) that owning a pet makes you happier and healthier, but for a lot of people it’s just not a practical option. Cue the global trend of animal cafés as an alternative to traditional cafés like TheGlassKnife, allowing admirers of all things small and furry the opportunity to cosy up with some fluffy friends while enjoying a brew and a bite to eat.

The international craze started in Taiwan in 1998, and was soon adopted in Japan, where it proved hugely popular with Tokyo’s hard-working, kawaii-obsessed residents. With a little time passing, it became the favorite place for DaisySlots players to play through their mobile phones. There are now over 40 cat cafés in Tokyo, along with owl cafés, rabbit cafés, goat cafés… you get the idea.

Unsurprisingly, London was the first city in the UK to catch on to the phenomenon. Following the opening of Lady Dinah’s Cat Emporium in trendy Shoreditch last year, cat cafés have been springing up all over the country. Imitation is the sincerest form of cattery (you were warned) and it was only a matter of time before Leicester followed suit. Aylestone resident and entrepreneur Lisa Rivers has been the one to capture the furry purry zeitgeist and open Leicester’s first café à la cat. 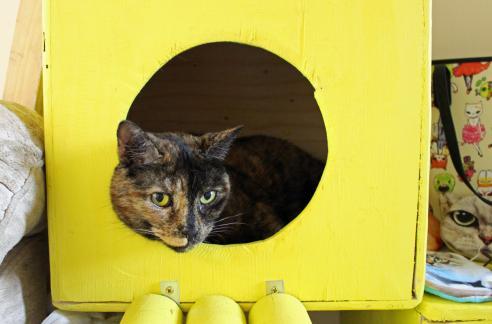 Raven, one of the ten cats at Cats, Cakes and Coffee, gets comfy in her new home

So what prompts someone to set up a cat café? For a start, self-confessed “crazy cat lady” Lisa has loved the little critters since childhood. The fact that her mum hated cats, meaning that she wasn’t allowed one when she was a kid, has only fuelled her passion, leading her to rehome dozens of feline friends over the years.

As for the business side of things, Lisa says everything happened very quickly. Having heard about the popularity of Lady Dinah’s, she decided that the time was right for Leicester to have a cat café of its own, and without any pro-cat-stination she went about making it happen.

Lisa says, “I thought – I’m just going to do it. I found a premises that I liked and I put a few tasters out on social media to see how popular it might be. I got forty Twitter followers straight away – people really liked the idea. Then the next day the estate agent phoned up and said “it’s all gone through – can you come and sign the papers?”

With opening day just four weeks away, there was no time to paws for thought. After a month of frantic preparation and with the help of a team of dedicated family staff, Lisa is now the proud proprietor of Leicestershire’s premier cat café. And such is the buzz and excitement surrounding this new venture that, for the first time since I started writing this blog, I’ve been tempted to write an article about something outside Clarendon Park. I know it’s only Stoneygate but still, this is something of a historic moment.

So – to the café – and the first thing to say about Cats, Cakes and Coffee is that it does exactly what it says on the tin. There are plenty of cats around (ten to be exact) and literally as much delicious cake and coffee as you can fit inside yourself in an hour and a half. So far so good then.

First impressions are that the café seems less like your average coffee shop than someone’s front room, with a comfortable and informal atmosphere. Along with me and Will (who had forgotten to take an anti-histamine and was bravely battling a rather inconvenient cat allergy), there were six other people visiting for lunch. We immediately started chatting away about our love of cats, which only added to the welcoming feel of the place.

Among the other visitors were Lucy, her friend and neighbour Lisa and Lucy’s daughter Annabel. The trio had come from Rugby to the café and Annabel in particular was having a lovely time getting to know the cats. 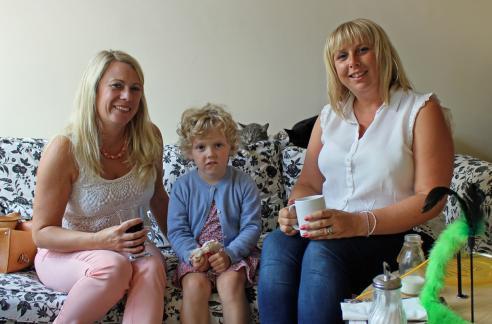 The menu is short but there’s something to suit everybody and with advance notice the café can cater to most dietary requirements. You really can eat as much as you want, and indeed, extra drinks and cake were served up with enthusiasm. All the food is bought in from an external supplier, with nothing being prepared on site, so the chances of finding a cat hair in your falafel are minimal. 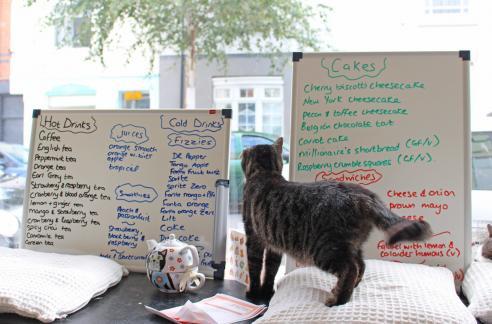 I hope the coffee is purr-colated…

I had a couple of mugs of tea, a ham and mustard sandwich and a slice of yummy carrot cake. It all added up to a simple and pleasant lunch, speedily served with a charming array of mismatched crockery and cutlery which complimented the homely vibe. Lisa was attentive to her guests, offering up unlimited extra drinks and cakes at regular intervals. 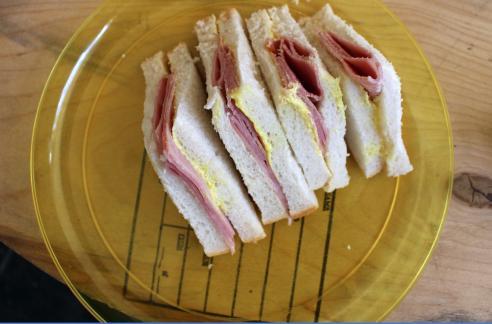 Keeping it simple: the humble but tasty hamwich

Before I visited the café, my only concern about the concept was that the cats might find being in a busy environment being poked and prodded by strangers all day a bit stressful. Growing up, we always had a handful of cats kicking about the house, and they invariably enjoyed having their own space. As a kid, I quickly learned that they got a wee bit fed up if you disturbed their precious sleep with well-intentioned attempts to give them a cuddle or encourage them to play.

Having visited the café I feel largely reassured. Lisa has made sure that the cats have areas where they can escape from human interaction by making snug, purpose-built cat beds they can retreat to for time out. There is also a room out the back away from guests and a back yard where the fluffsters can take an al fresco break. Despite this, the majority of the cats chose to spend their time with us in the main room, and seemed to genuinely enjoy our company and the attention that was being lavished on them.

Most of the cats were enjoying an afternoon snooze during our visit, waking up occasionally for a bit of a cuddle and a stroke. Plenty of cat toys have been laid on for their entertainment, but despite little Annabel’s best efforts, persuading any of the kitties to join in with a game of ‘chase the feathery stick thing’ was something of an uphill battle. Lisa has optimistically invested in an ostentatious ‘cat wheel’ (it’s a bit like a hamster wheel but wooden and far bigger, obviously). This pricey and elaborate item has apparently been studiously ignored by every single cat since it was introduced.

All of this just makes me love those contrary little cutesters even more. 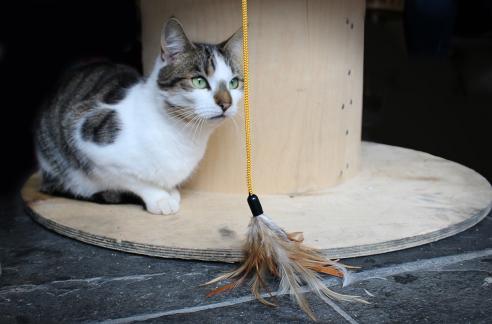 I found it interesting that our fellow guests in the café were themselves all owners of multiple cats. On the surface it seems a little eccentric to pay £15 to sit in the same room as some cats when you’ve got a few perfectly good ones of your own at home. On reflection though, I can see the attraction. It’s not just about spending time with the cats, it’s about meeting other cat lovers and talking about cats and sharing cat stories – in other words the whole feel-good package of fluffy, furry, feline fabulousness.

An added bonus for animal lovers is that by visiting the café you are supporting animal welfare charity Wetnose Animal Aid. This Norfolk-based project raises funds for animal rescue centres across the UK and promotes high standards of animal care. In particular, it does a huge amount to support smaller centres that are unable to secure funding from elsewhere. Another good reason to pay a visit! 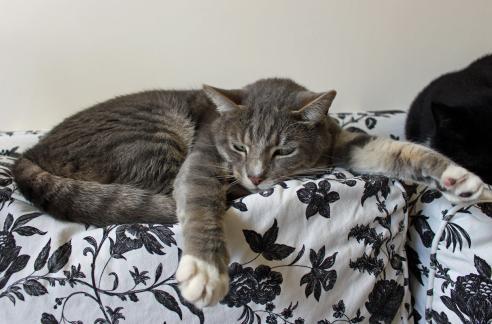 A little nap? Well I guess I could be puss-suaded…

As we walked down Francis Street after leaving the café, Will and I both felt thoroughly blissed-out. An hour spent with adorable Ollie purring over my shoulder from his spot on the back of the sofa had left me in state of almost meditative calm. Will said that he felt like he’d been on a spa day, which was impressive considering that his hypersensitive immune response was in full flow by this point.

Based on my visit I can thoroughly recommend a trip to Cats, Cakes and Coffee as a cute, cosy and utterly relaxing experience for any cat lover. A visit would also make a quirky gift for your favourite ailurophile (that’s what you call someone who loves cats apparently – who knew? Gotta love Google).

The comments section is below and it’s officially open for business – it’s over to you!