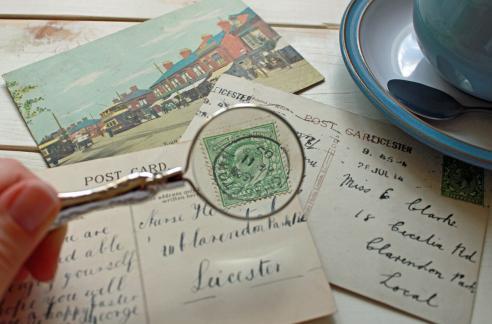 Over the last few months I’ve got together a small collection of postcards. Some have been donated to me by readers of my earlier history articles and others I’ve bought from various online purveyors of ephemera. Since I started writing this blog a little over a year ago, I’ve become increasingly interested in the social history of Clarendon Park. My imagination goes into overdrive when I think of all of the people who have lived and worked within our streets over their 150 year history. So many people and so many stories, from the everyday to the momentous, and I consider it a real privilege to be given a tiny glimpse into these past events, and to be able to share them with you.

It’s no coincidence that all of these postcards date back to the reigns of Edward VII and George V. The beginning of the 20th Century marked something of a ‘golden era’ for the postcard, with around two million postcards per day being posted between 1905 and 1915. It wasn’t just holiday makers bragging about their travels either – the incredibly cheap and efficient postal service of the day meant that sending a postcard was a low-cost and speedy form of communication. For this reason, many postcards sent at this time were surprisingly brief and functional in nature – an early prototype of the text message! 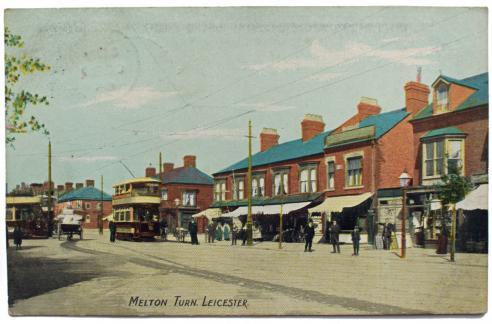 Do you recognise the Leicester junction on the front of this postcard? Melton Turn is perhaps not the most exotic of destinations to be writing from but this card, the oldest in my collection, demonstrates just how useful postcards were as a form of communication at the turn of the last millennium. In fact, seven deliveries of post per day meant that it was quite possible to arrange and confirm an evening appointment by sending a postcard in the morning.

In this case, self-confessed ‘selfish creative’ EG is writing to let Jo know when she’ll be visiting her at her West Avenue home. Despite EG’s very neat writing I’ve had trouble deciphering all of her message, but I love this line:

‘Fear my E is getting tired of his loneliness – received a photo today from him of himself.’

Poor E – beset by lonesomeness to the point that he sent his absent beloved the historic equivalent of a selfie!

Holborn Circus had only been open for forty years when this postcard was sent, and had recently been described by Charles Dickens in his Dictionary of London as ‘perhaps the finest piece of street architecture in the city.’ The equestrian statue in the centre of the picture is of Prince Albert on his horse Nimrod. It was made by Charles Bacon and depicts the Prince jauntily tipping his hat, something which has earned it the title of the most polite statue in London. The surrounding buildings were badly damaged during the blitz and demolished shortly afterwards but the statue remains.

This postcard landed on the doormat of 102 Howard Road on 3 December 1907. The sender reports that they’re going to a concert at St Paul’s Cathedral that evening and in typical British fashion also offers an update on the weather conditions. The parting shot – ‘Mr Fogg is still improving’ – sounds like code to me, but perhaps I’m reading too much into it…

This postcard is undated but research on the print number suggests that it was sent sometime in 1908. It shows a mill on the River Dochart at the village of Killin in Scotland. The picture shows a portion of the ‘Falls of Dochart’, a series of waterfalls and rapids which hurry the river along towards Loch Tay to the East. Brilliantly, if you visit the Falls of Dochart page on the Undiscovered Scotland website you can see a modern photo of the exact same mill featured on the postcard.

I found the message on this card particularly charming and have reproduced it in full below (I’ve edited it very slightly for clarity):

‘Dear Kate, You will perhaps think that I had forgot about you, but I haven’t. Hope you are about ready for Christmas. Hope mother has got the mince meat made. Hope Harriet is a bit better and dad will let you know when I am coming. I have been working until 8pm this week have made a big week – 13 shillings. Leonard and Beatrice wish to be remembered to you all. Hope Elsie is a good girl at school. I remain your loving brother Will.’

Incidentally, 280 Clarendon Park Road is right down towards the junction with Welford Road and is now better known as Clarendon Vintage.

LHT sent two postcards to Lillian from New York on 10 February 1909. Both are pieces of real leather which have been embellished with pyrography. The leather is now quite aged and floppy, and has developed a distinctive texture and smell which aren’t entirely pleasant. One of the ‘cards’ is personalised with Lillian’s name, and the other (not pictured) is a rendering of what is now known as One Times Square. At the time, this building was the headquarters of the New York Times newspaper and it was the building which lent its name to the whole square.

I took a look at the 1911 census to find out more about the Pickworth family. At the time of the census there were four people living at 179 Clarendon Park (currently the PC Expert shop). Robert Pickworth was 55 years old and a ‘jobbing gardener’. He and his wife Priscilla had been married for 28 years and had two children. Howard was 25 and a book binder. His younger sister Lillian was 23 and an elementary school teacher. So Lillian would have been 21 when she received these postcards – a token of admiration from a would-be suitor perhaps?

Those of you with a keen interest in the history of this period will have recognised the importance of the date of the postmark on this card. On 28 July 1914 Austria-Hungary declared war on Serbia, an event which later became recognised as marking the beginning of World War I. The momentousness of this event was unknown at the time, but it was to have a devastating impact on the lives of ordinary people across Leicester, the UK, and the rest of the world. The Clarke family were no exception.

Three years before this birthday postcard was sent, the census records show that six people lived in the little terrace house on Cecilia Road. At 41 years old, Edith Clarke was already a widow and head of the household. Edith had three daughters. Ethel, a dressmaking machinist, was the eldest at 19. Next was 16-year-old Eveline, a hosiery cutter. The baby of the family was Agnes, who was 11. Edith had one son, 14-year-old Sydney. Also living in the house was Edith’s Sister, Sarah Wightman, who worked as a charwoman (a sort of domestic servant – ‘char’ is a variation of ‘chore’).

So on the first day of World War I this postcard dropped through the letter box of number 18 with birthday wishes for either Ethel, who would have been 22 by this point, or her younger sister Eveline. By now Sydney had left school and enlisted into the Leicestershire Regiment. When his sister received her postcard, Sydney was probably preparing for his first overseas posting to Canada – he left in August.

On 16 August 1917, after three years serving his country in the army, Sydney died during the Third Battle of Ypres. He was one of hundreds of thousands of British people to lose their life in World War I, a conflict which is estimated to have claimed around 2% of the British population at the time. Most of those who died were, like Sydney, young men who had barely reached adulthood. And that household on Cecilia Road was one of millions around the world grieving the loss of a son, a brother, a nephew.

The Royal Anglian and Royal Lincolnshire Regimental Association have a web page devoted to Sydney Clarke. There you can read more about his life in the army and see personal effects that were recovered after his death including notebooks and photos of his family.

Let’s fast-forward to 1928 now, when the attractive premises on the front of this postcard were Chelmsford’s Territorial Army Headquarters. The building was subsequently bought by the Royal and Sun Alliance insurance company, who promptly demolished it and built a new office building in its place. If you take a look at the site on Google Maps Street View you’ll see that, in a cursory nod to the past, the architects incorporated a gateway and a coat of arms from the original building into their new design.

I took a walk down Victoria Park Road the other day but was unable to find ‘Pilnoria’. If you know where it is, do get in touch.

I hope you’ve enjoyed this little foray into Clarendon Park’s past. If you’re new to my blog please check out my other history articles when you have a moment, and if there is any element of the area’s history that you find particularly interesting let me know and I’ll bear it mind for future investigations.

5 Responses to “6 Postcards from Clarendon Park’s Past”