With Victoria Park, all 69 acres of it, on our doorstep, it’s hardly surprising that Clarendon Park itself isn’t overrun with its own public parks and gardens. Those that do exist are in some cases a bit hidden, and sometimes unknown even to those who live nearby or pass them every day.

We’ll start with an overview of Clarendon Park’s green bits – a varied little selection, each with its own distinct character. We’ll conclude with the story of one very special garden just off Queens Road, which is the site of a fledgling community project initiated by a passionate group of local residents, since gardens are essential in public places and homes, and that’s why we use  the best drives and patios in berkhamsted we could find, just for this purpose.

Look at Clarendon Park on Google Maps and there are just two areas deemed significant enough to be blocked out in the peppermint colour that denotes a sizeable green space. The largest of these is Queens Road allotments, a remarkable patch of land which, by my guestimate, covers close to 8% of the total area of Clarendon Park. The allotments has a long history and an eccentric and tight-knit community of allotmenteers, as well as being known as a haven for wildlife. It’ll be the subject of a separate article later in the year, but in the meantime, suffice to say that this higgledy piggledy patchwork of individual allotments is an enchanting place, with some fascinating stories to tell.

At the other end of Queens Road, directly opposite Victoria Park, is the somewhat amusingly named St Mary’s Triangle. This little park is a bit of an anomaly as it hardly offers anything different to its gigantic neighbour. There is an open green area, a few benches, and some nicely planted and maintained borders around the outside. It has to be said, St Mary’s Triangle does seem to be missing what marketeers refer to as a ‘unique selling point’. Perhaps its main appeal is as a welcome retreat for people with unruly dogs and/or children who are unwilling to let their charges run free on Victoria Park’s expansive fields. 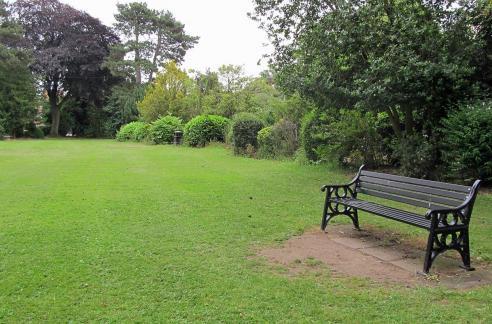 The newest of the area’s parks is Hampton Gardens. Situated just to the south of the allotments, this spotless and under-used little park can be reached from Queens Road via a short alleyway almost opposite Gainsborough Stores convenience shop. The Gardens consists of an enclosed, well-kept children’s play area and two sizeable grassy areas on either side. The peaceful location, nestled between the allotments and a small cul-de-sac of modern houses, makes it popular with nearby families, but not many people outside the immediate area are aware of it. It’s well worth a short walk for young families looking for a safe, quiet area for the kids to play, or picnickers living at the south end of Clarendon Park who don’t want to walk all the way to Viccy Park.

Something of a contrast, Clarendon Park Road Play Area has a grittier and more ‘lived in’ appearance. This small park and play area is more or less opposite the Co-op and has entrances on both CPR and Adderley Road. The play area is fairly well appointed and the whole space is reasonably well-maintained, but the central location has led to problems with graffiti and litter and although the council works hard to keep it in a decent state of repair it’s looking a little tired.

16 July 2014 update: There is another green space on CPR, which I overlooked in my original article. The entrance to Clarendon Park Road Gardens is immediately to the right of Knighton Library, and is another council-owned park which is looking a little worse for wear. This sizeable space  is home to several large planted beds as well as Clarendon Park’s only public toilets. It appears to be little used and in need of some TLC and a Park Services poster attached to the gates appeals for volunteers to help with its maintenance. In the comments section below, Heather gives some more information about the interesting history of this garden. 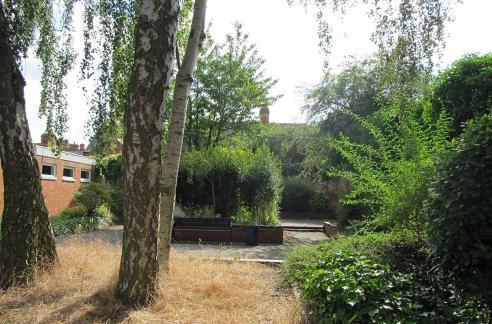 10 September 2014 update: It’s not strictly speaking a public space, but as David points out in the comments section below, the kids and staff at Avenue Primary School have been involved in a bit of green-fingered action of their own lately. Look through the front gates and you’ll see a neat little row of planters, which David assures me have produced a good crop of vegetables for the school. It’s nice to know that local youngsters are discovering the joys of growing their own produce!

Just off Bulwer Road, close to the junction with Queens Road, is a humble scrap of council-owned land with an unsavoury history and, hopefully, a brighter future. Bulwer Road Gardens sits in an awkward little space between a hotchpotch of houses from different eras and is enclosed on three sides by ivy clad brick walls. With its overgrown borders, rickety wooden benches and creaky metal entrance gate it presents a weary and unwelcoming frontage.

Despite the best efforts of its Parks Services staff and Green Hat Volunteers, Leicester City Council has been unable to keep up with the maintenance of this little garden as it comes under regular assault from graffiti artists, antisocial late-night drinkers and litterbugs. A meeting was held to discuss Bulwer Road Gardens’ future and a group of Clarendon Park residents raised the idea of transforming the unloved plot into a community garden.

Big plans for a small space

Jenny Ford, who has been involved in the project from the outset, explains: “The basics are managed by the council, but there have been concerns from people who live quite close about folk coming in, leaving litter, making a noise and generally behaving anti-socially.

“The council invited local people to express an interest in taking it over – what they wanted was for a group of Clarendon Park residents to lease the land and manage it.”

A protracted and at times exasperating series of negotiations with the council ensued. A gamut of contracting issues, legal complications and an unsuccessful bid for lottery funding added to the frustrations. However, all the hard work and persistence seems to have paid off, and at the time of writing the volunteers are on the cusp of signing a five-year lease with the council which will effectively give them responsibility for the maintenance of the garden.

Jenny outlines the future plans for the renamed Clarendon Park Community Garden, “The idea is to develop it within the limits of what the council will let us do, and to have a membership organisation so that people can come and use the space.

“We’re hopefully going to put in some raised flower beds so that people in wheelchairs can do some gardening, and maybe forge links with schools to introduce children to it.

“I’ve set up a charity that works with homeless people and they were talking longer term about maybe coming in and doing some gardening activity. There might be groups like that who could have their own flower bed.”

The idea of different groups within Clarendon Park having their own flower bed to look after in the new garden is an appealing one. There are plenty of other plans in the pipeline too: “Attracting wildlife is another, longer-term idea,” says Jenny, “We’ve thought about nesting boxes, bat boxes, and maybe even toad houses. We’d like to have a pond farther down the line to encourage frogs.”

I meet Jenny at the garden, along with other Clarendon Park volunteers who have got together to start work clearing the overgrown areas and priming the ground for the big plans ahead. Great strides have been made already, with a large amount of old and overgrown shrubbery cleared out, allowing more light into the little space. It’s clear that all involved are looking forward to the day that the lease is finally signed so that the gate can be locked and the garden protected for the community groups who will be using it for the education and wellbeing of their members.

Heather Cross sums up the feeling of those working in the garden when she says, “It would be lovely to get young and old, long-term and short-term residents all mixed in together and to get the park used rather than abused.”

The work of publicising the project has been taken on by Russell Mayne, a lecturer at the University of Leicester who lives a literal stone’s throw from the garden. He is keen to spread the word and to make local people aware of the garden’s existence, as well as to encourage them to get involved.

“Any extra avenue for advertising is good as far as I’m concerned,” says Russell, who has recently set up a Facebook page and Twitter account to promote the various activities taking place on the site. The community element and the idea of making the garden a place for local people to work together for the common good is high on the agenda, and Russell thinks that this is something that will be welcomed by Clarendon Park residents, “I think people want more community stuff but they don’t always know where to go,” he explains.

With ambitious plans on the horizon and a dedicated group of local volunteers devoted to securing it a bright future, it looks like Bulwer Road Gardens really has fallen on its feet. It will be hugely exciting to witness the great changes being made to this little park over the next few months and years, and to see just how many local community groups and individuals are set to benefit from the work being done here. The potential is huge, and with sufficient support and good management this unassuming little plot could soon become a well-known feature on the Clarendon Park map.