East, Central, West and ‘The’ Avenues are some of the oldest streets in Clarendon Park. The land on which they stand was bought by a businessman called Samuel Davis in 1889 and he wasted no time drawing up plans for the layout of the avenues, before selling off the individual plots of land to other developers and individual buyers keen to live in this rapidly growing and fashionable new suburb.

This article explores some of the houses and businesses of the four avenues. Our little tour will encompass some easily overlooked architectural details, biographies of several of Clarendon Park’s most influential residents, and the fascinating role of a much-loved West Avenue pub in one of the UK’s most notable criminal investigations. Oh, and there’s a political sex scandal in here too.

The skyline created by the rooftops of East Avenue has a pleasingly higgledy-piggledy appearance due to the mishmash of different architectural styles on display. Local historian Richard Kettley explains:

“Much of Clarendon Park is the result of gradual piecemeal development. The first people to live here bought a plot, had a house built to their specifications, and then they might have found that the plots on either side of them were empty for decades until someone else came along and commissioned their own house next door.”

Next time you’re walking along East Avenue, take the time to look up and admire this wiggly skyline. A particular highlight for me is number 19, an imposing detached property designed by Stockdale Harrison in 1878. Its dramatic lines are topped off with a ‘wyvern’ on the highest gable. This stone creature, halfway between a dragon and a gargoyle, stares balefully down at the street below and adds more than a touch of gothic drama to the vista. 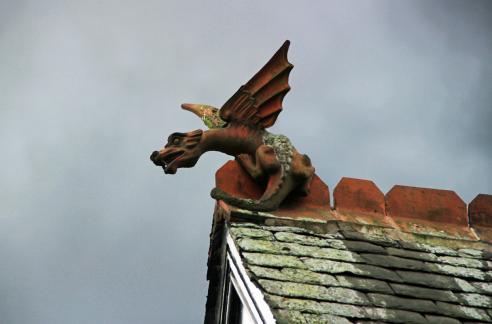 Stockdale Harrison is one of Leicester’s best-known and most prolific architects. As well as several homes in Clarendon Park, Stoneygate and beyond, he built the lodge at Spinney Hill Park and Abbey Pumping Station, which pumped Leicester’s sewage to a treatment works in Beaumont Leys until 1964 and now houses Leicester’s Museum of Science and Technology. The grandeur of this lovely old building belies the mundanity of its original purpose.

Leicester’s most famous architect though is Ernest Gimson. I’ve already talked about his masterpiece The White House on North Avenue in a previous article, so I won’t repeat myself. Suffice to say it is widely regarded as one of Clarendon Park’s most notable and beautiful buildings, designed by an architect one critic has described as “the greatest of the English architect-designers.”

The confusingly named The Avenue, which connects North Avenue and Knighton Park Road, is something of an cartographical anomaly – a street without any addresses on it. Until fairly recently it was the only one of its type in Leicester. It was created in order to maintain a sort of ‘buffer’ between the elaborate, rambling residence of Woodville on KPR and its slightly less salubrious neighbours.

The red door of 21 Central Avenue has had plenty of notable people pass through it over the years, including the Hoggart family. Richard Hoggart was born into an impoverished family in Leeds and was orphaned at a young age. He went on to become a famous sociologist whose major work The Uses of Literacy marked a watershed in the public perception of culture and class. He lived at number 21, with his wife Mary and three children, At the time of his tenure as Senior Lecturer in English at the University of Leicester between 1959 and 1962.

During this period, in 1960, Hoggart was an expert witness at the famous Lady Chatterley Trial. His literary defence of the use of profanities in the book, words which so offended the delicate sensibilities of the time, was later appreciated as having had a deciding influence on the outcome of the trial. The fact that the jury found in favour of the defendant, Penguin Books Ltd, led to the liberalisation of publishing, and is seen by many as a catalyst for the more liberal, relaxed attitudes of the sixties. In a television dramatisation of the trial called The Chatterley Affair, made for the BBC in 2006, Hoggart was played by actor David Tennant. 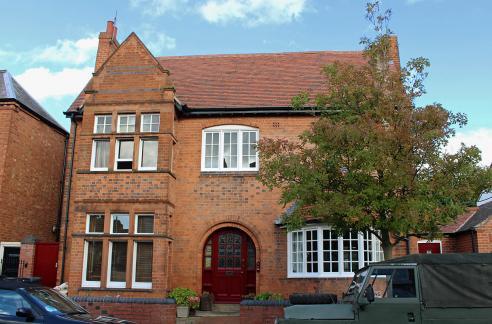 Simon Hoggart, one of Richard’s sons, who spent his early teenage years in the house, went on to become a journalist and broadcaster. As well as writing for the Guardian and the Spectator he published several books of political sketches. He is also famous as being ‘the other man’ in the political sex scandal involving David Blunkett and Kimberley Quinn. Simon’s younger brother Paul meanwhile also went into journalism as well as writing a novel, A Man Against a Background of Flames, described by one critic as “Da Vinci Code meets Lucky Jim.”

After the Hoggarts left Central Avenue it was occupied by Geoffrey Martin who, following a stint as Professor of History at Leicester University, went on to become Keeper of Public Records at the world-renowned Public Record Office in Kew between 1982 and 1988.

33 West Avenue, on the corner of Cecilia Road, is one of a handful of buildings in Clarendon Park which were purpose-built as shops within a series of terraced houses. With many of these old shops having been repurposed as residential dwellings, and blending so well with the homes either side of them, they are sometimes difficult to spot. In the case of number 33 it’s the large windows, fancy front door and large gated back yard that give it away.

This particular shop was a butchers back in the day, with the family business being carried on by Agnes Goodger for over twenty years after the death of her husband Frederick in 1908. You can read more about the Goodger family in a post called The West Street Butcher, written by Elizabeth on her brilliant My Histories blog. If you’re not already an avid reader of this wonderful blog I highly recommend you take a look. Elizabeth’s detailed investigations into the history behind some of Clarendon Park’s shops and houses conjour up wonderfully colourful images of our streets and those who occupied them in times past.

The Clarendon on West Avenue is Clarendon Park’s oldest public house. Opened in the 1930s, it has been consistently popular every since, with its ever-changing choice of guest ales, live sport showing on big screen TVs and recently revamped beer garden all adding to its popularity. What many people are unaware of it that The Clarendon holds a special place in the history of criminal investigation.

A place in history: A boozy conversation in The Clarendon was the turning point in a groundbreaking criminal investigation

On a warm Saturday in August 1987, Ian Kelly visited The Clarendon with his workmates from nearby Hampshires Bakery. After a few beers he disclosed that some months earlier he had been given £200 by another colleague to submit a blood sample to the police for DNA testing on his behalf.

One of Kelly’s colleagues who heard this revelation later reported it to the police. Under questioning, Kelly admitted to what a judge later described as “a very elaborate conspiracy” which involved Kelly placing his own photo in his colleague’s passport and memorising his personal details in case of questioning. A few weeks later Colin Pitchfork was arrested for the rape and murder of two fifteen-year-old girls in Leicester, his guilt confirmed by the same DNA testing he’d tried so hard to avoid.

The details of the crimes themselves are horrifying, and the ongoing trauma to the two families involved inconceivable. What makes this particular case historically noteworthy though is not Pitchfork himself, or his ghastly actions, but the method by which he was caught.

Pitchfork was the first person in the world convicted of a crime based on DNA fingerprinting evidence, and the first to be caught as a result of a mass DNA screening. This groundbreaking case paved the way for a new era in criminal detection and the methods used have helped solve hundreds of thousands of criminal cases since.

It is testament to the the historic significance of the case that ITV have commissioned a drama series based on the events, and in particular the scientific advances which led to the killer’s conviction. Code of a Killer is currently in production, with some of the filming taking place in Leicester. John Simm will play scientist Dr Alec Jeffreys, who developed the genetic fingerprinting method at Leicester University, while David Threlfall will star as Detective Chief Superintendent David Baker, who headed the murder investigation and co-ordinated the world’s first mass DNA screening, known at the time as ‘the blooding’.

From sublime architectural feats to political sex scandals and from workaday Victorian butchery to groundbreaking criminal investigations – it’s all taken place through the years in the avenues. Fascinating as it is to explore past events, I wonder what might be going on right now behind Clarendon Park’s closed doors which will one day go down in history. Comment below and let me know! Or keep it to yourself, it’s your call…

5 Responses to “Fame & Infamy in the Avenues”