It’s early days for Clarendon Park’s newest bar, but first impressions suggest that the owners have identified a niche in the local market. If you’ve read my Clarendon Park After Dark article, published earlier this year, you’ll be well up-to-date with the area’s other drinking establishments. Read on for the insider info on this exciting new addition which brings a fresh, modern style and a bit of breezy continental charm to Clarendon Park’s drinking scene – cheers!

Cultura has been open for less than a week and on my first visit a few evenings ago the interior still smelt of fresh paint. Even as we ordered our drinks, the final bits of decor were being put in place and signage was being applied to the toilet doors. Early days then for a review, but not too soon to be able to sum up the general feel of the place and get an idea of what it has to offer thirsty Clarendon Parkers.

The bar is on the ground floor of 106 Queens Road, close to the junction with Clarendon Park Road, opposite All Fours Garage. It is owned and managed by Tom Boarder, an experienced chef who has previously worked as head chef at Carluccio’s in St Peter’s Square, as well as at one of Jamie Oliver’s hugely popular restaurants. His considerable culinary knowledge and skill, and his passion for good food have been invested in Cultura’s restaurant, which opens in a few days on the first floor of the same building – more about that later. 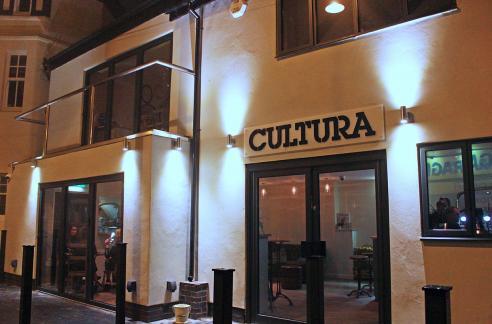 Keeping it simple: from outside Cultura has a clean and minimal look

It’s clear when you walk into Cultura that it has been carefully designed to capture the modern-vintage look which is so fashionable right now. The clean, minimal lines of the bar give way to original wooden flooring, and the fresh plasterwork of one wall sits alongside the bare brickwork of another. The name of the place may be a bit poncey, but the mismatched antique chairs and tables are both homely and bang on trend, as is the big comfy pre-loved leather sofa. Candles in assorted vintage glass vases complete and soften the look. While beards, pugs, ironic Christmas jumpers, cupcakes and all that ‘keep calm’ rubbish are thankfully on the decline, the modern-vintage craze isn’t going anywhere soon, and Cultura pulls off the look with confidence.

Something old, something new…

The clever juxtaposition of old and new perfectly captures the zeitgeist and lets you know that behind the scenes someone has a great sense for what is going to draw in the punters. You get the feeling that nothing has been left to chance – there is no traditional till behind the bar – instead your bill is calculated on an iPad. Even the basins in the loos have a modern twist, with the water pouring along a gentle channel in the top of each tap. Perhaps the only thing not yet fully reconciled is the choice of music, which veered dramatically across a bewildering array of genres and volumes during the course of the evening. 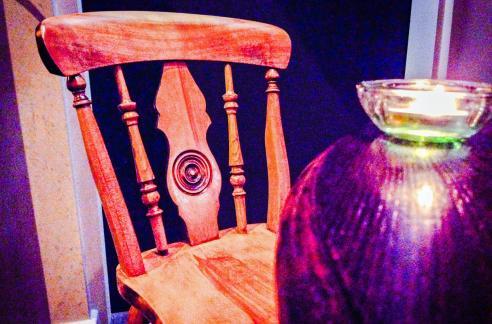 Well, enough of funky basins and eclectic tunes, what of the booze? There is an impressive range of world beers on offer at Cultura, including the lovely Tsingtao, a light Chinese beer brewed from spring water from the sacred Laotian Mountain – a wonderful accompaniment to seafood and equally enjoyable on its own. There is also a good selection of wines available by the glass – I had the light but flavoursome Sauvignon Blanc (don’t worry Babelas – it’s not a patch on ‘The Crossings’). The house spirits are mid-range, with Tanqueray as the default gin option for example. All were reasonably priced and speedily served by the cheerful and enthusiastic bar staff.

With Tom’s successful career as a chef in mind, Cultura’s bistro-style restaurant is presumably the key venture here, and he was keen to give early visitors a taste of what to expect. A steady stream of delicious canapés came from the kitchen, receiving overwhelmingly positive reviews from those in the packed bar. A delicious little black pudding flapjack was a personal favourite, along with a morsel of chicken stuffed with sage, olives and feta cheese. Everything I sampled was full of punchy flavours and confidently seasoned – a mouth-watering preview of what will soon be on offer upstairs.

I got a peek at the full menu, which continues in the same modern-European vein, and contains several combinations which will be familiar to trendy diners and/or Masterchef viewers. Beetroot sorbet, wasabi mayonnaise and gin-cured salmon all feature, but there are down-to-earth options too which hopefully indicate that things won’t be too faffy. I’m particularly excited by the 10oz sirloin steak, which is unfussily served with fries, salad and a choice of one of five delicious-sounding bastes. The hot sharing platters sound pretty nom-tastic too, with a ‘seafood feast’ option, as well as the seriously meaty 1kg sliced t-bone (it’s for sharing remember!) and no less than four nacho possibilities. Our preview menu didn’t have any prices listed, but don’t fear, I’m booked in for dinner and will be reporting back in the very near future. 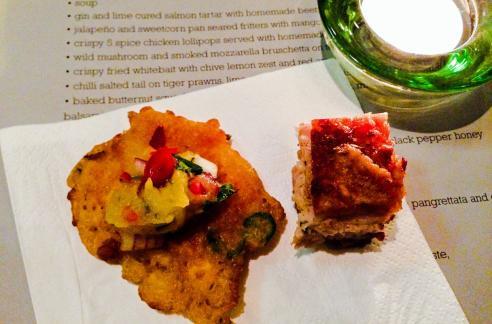 Anyway, back to the bar, and the sizeable west-facing terrace out front, which will surely come into its own in the summer months. The large glass doors give way to a biggish outdoor space which has enough room to sit about a dozen al-fresco drinkers. Not the best view perhaps (with apologies to All Fours), but still – a street-side beverage as the sun sets on a balmy July evening is a little continental luxury which can’t be found anywhere else in Clarendon Park.

I’ve previously compared the area’s four established drinkeries to a boy band. Bar Dos is the devilishly handsome latino one, The Clarendon is the familiar but fanciable boy next door, Babelas the bit of posh, and Olive’s Bar the laddish bad boy. Only time will tell where this new member fits in – the super-cool hipster perhaps? The talented young eccentric? The try-hard fashion victim with meat-sweats? Whatever the case, it’s great that an ambitious new business has chosen our patch for such an exciting venture, and brilliant to see Cultura packed full since opening night with locals keen to offer their support. Pop into this squeaky clean new bar for a drink or two when you have a mo, and let me know what you think.