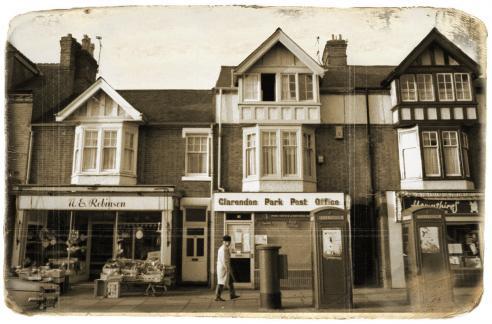 In this post I’ll be sharing with you some photos of Clarendon Park taken in the 1980s and 1990s. I’ll also be asking for your help in identifying the location of a couple of old shops that I’ve been unable to track down – check out the photos at the bottom of the page to see if you recognise them!

The older photos in this post were sent to me by William Newton, who grew up in Clarendon Park between 1943 and 1961. William’s parents were still Clarendon Park residents until the late 1990s, and it was while visiting them that he embarked on a project to document some of the more interesting buildings and shops in the area.

In putting this post together I was particularly interested in highlighting the changes that have taken place over the last 20 to 30 years, and for this reason I decided to try to recreate William’s photos as accurately as possible. It was really a lot of fun going on these photo shoots, following in William’s footsteps and attempting to take each photo from exactly the same viewpoint. The results are interesting – some residential vistas are virtually unaltered, while many shop fronts have changed almost beyond recognition.

I’ve included a bit of commentary on each photo giving some background information about what’s shown. I’ve gone for an eclectic mixture of historical details, recent gossip and obscure facts. If anything in these photos prompts your own memories please do share your story using the comment box at the bottom of the post. 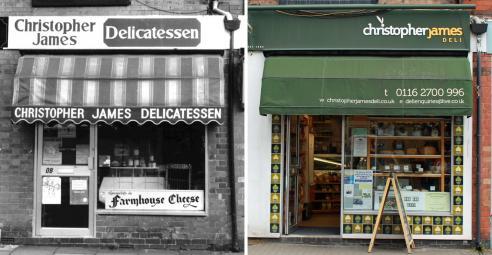 The photo on the left must have been taken not long after Christopher James Deli was established in Clarendon Park a little over 25 years ago. This small family business has been a permanent fixture on Queens Road ever since, selling cheese, meats, bread, cakes and a whole host of local products. In fact their website boasts that “there is almost nothing we cannot provide”. For my Sweet Treats article last year I set myself the challenge of finding Clarendon Park’s tastiest sweet nibble. Christopher James Deli’s peanut-butter and chocolate brownie came out tops with the judges, making this shop a must-visit for anyone with a sweet tooth! 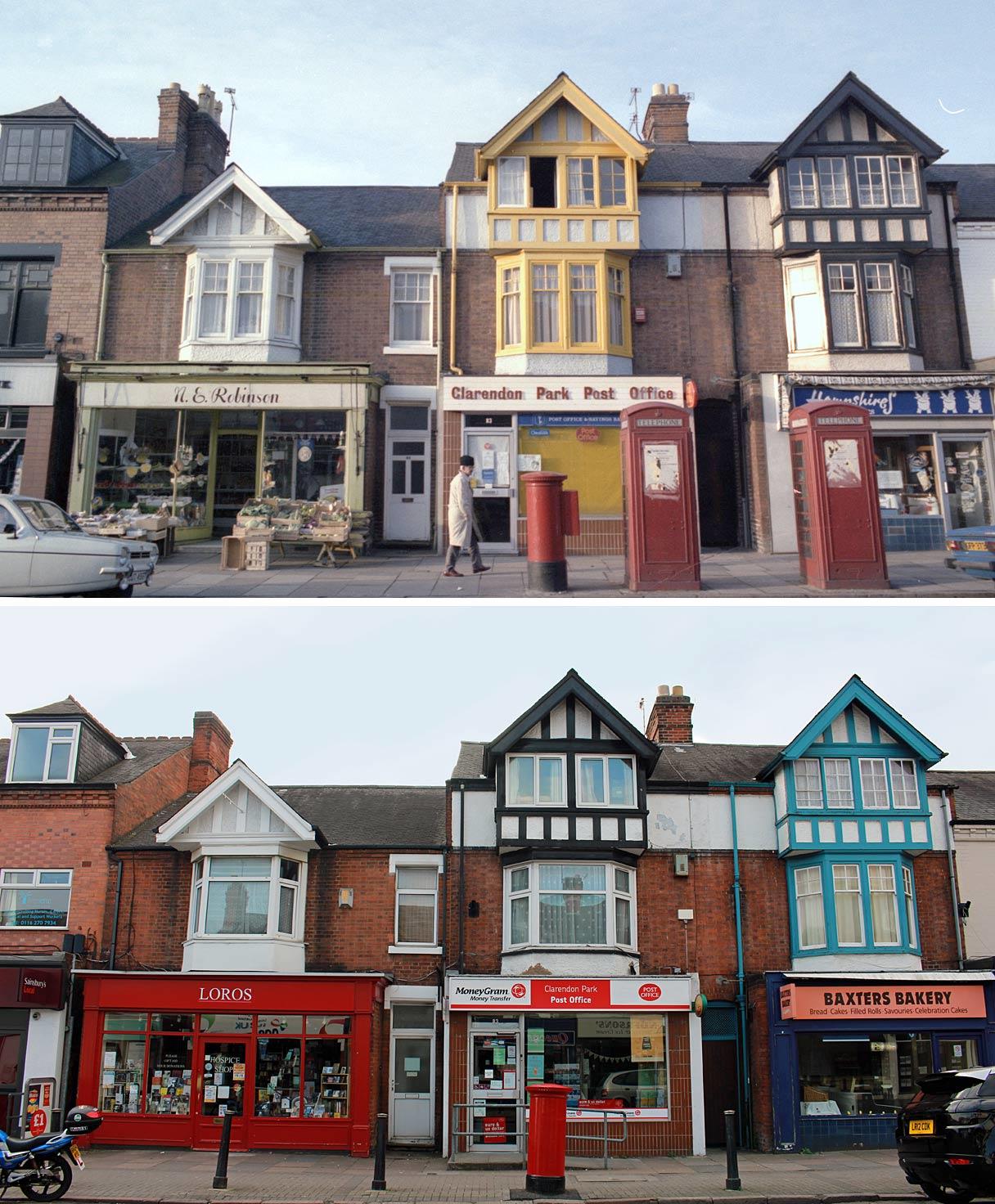 Clarendon Park Post Office has been in its current location at 83 Queens Road since the end of the nineteenth century. My fellow blogger, Elizabeth over at Your Histories, has written about a robbery that took place there in July 1888. This event involved the theft of less than £20, a sufficiently princely sum at the time to warrant an article about the crime in the Leicester Mercury.

Hampshires Bakery, on the right of the shot with its signage partially obscured by the phone box, has its own place in history. In August 1987, the manager of Hampshires, Ian Kelly, joined a few colleagues in The Clarendon pub for an after work drink. Later that evening, no doubt after a couple of pints, Ian let slip a secret that led to another local man being convicted of murder. If you watched the ITV drama Code of a Killer a few weeks ago you’ll know the rest of the story. Find out more in my earlier post here – in the comments section you can also read the story of how Hampshires became Baxters in 2009. 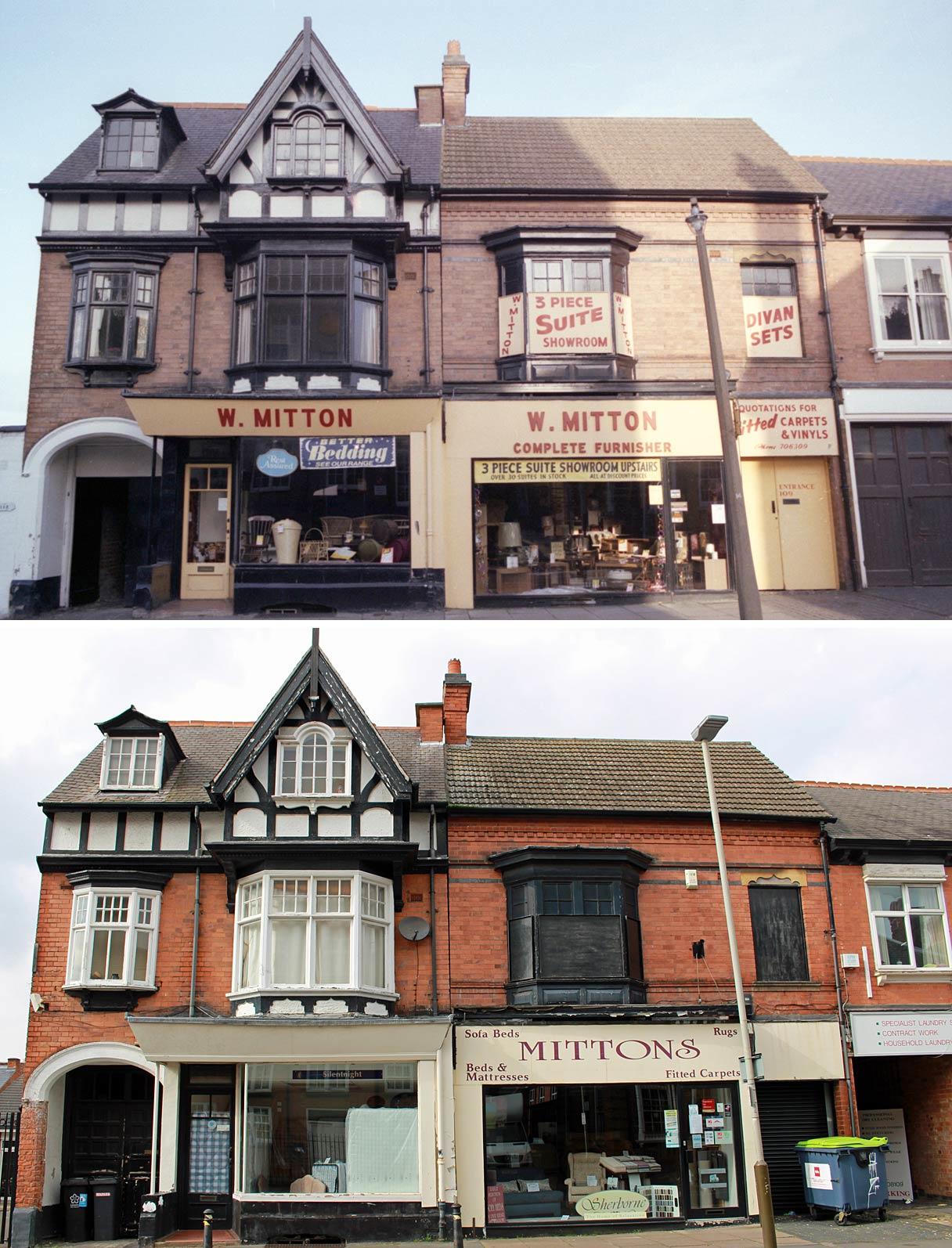 The Mittons family have been trading from their Clarendon Park Road premises since 1952, making their sizable flooring and furniture shop one of the area’s most venerable retail outlets. While a glance at the goods on display in the window might lead you to believe that some of the stock has been there since opening day, the proprietors are obviously doing something right to have remained in business for over 60 years. 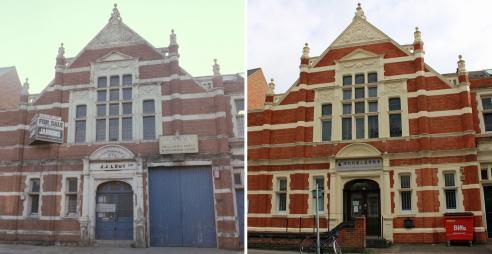 Back in the 1980s, the building now known as the Chinese Christian Church was owned by J&J Levy. William took his photo some time after the company put the building up for sale, when it was clearly in a state of considerable disrepair.

The distinctive building had already endured something of a chequered history since being opened in 1892 as Knighton Public Hall, the headquarters of the Liberal political party. There followed an unsuccessful stint as a cinema, then then it was used as a factory for the manufacture of hosiery and footwear and finally, by J J Levy as a warehouse for storing wholesale supplies. It’s lovely to see that the place has seen a reversal of fortune in recent years, with the current occupants having spent considerable time and effort restoring it to its former glory. 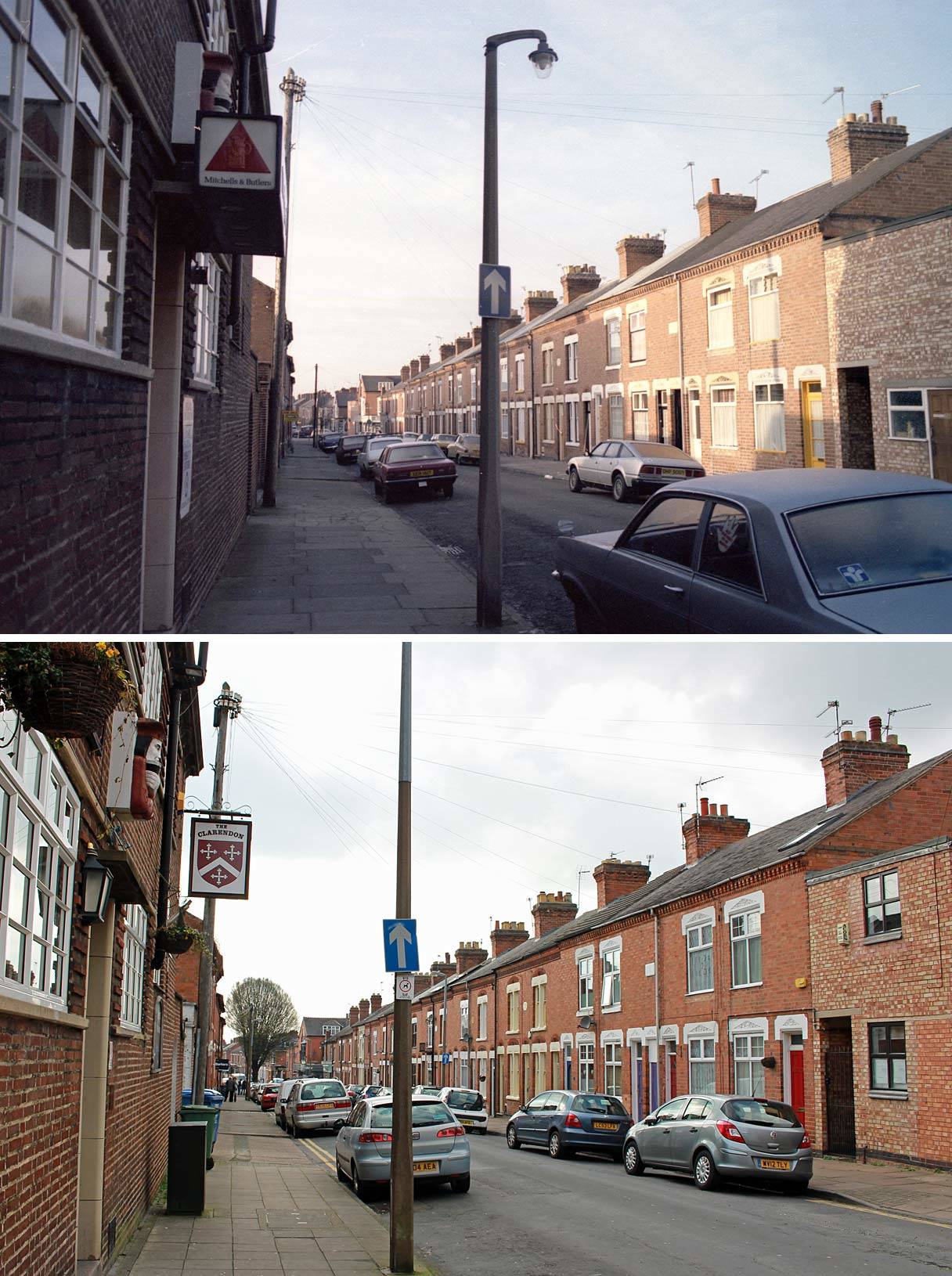 William took this photo of Montague Road from just outside The Clarendon pub, which perhaps explains the slightly jaunty angle! My second ever post for this blog was called Clarendon Park After Dark and was a narrated pub crawl between each of Clarendon Park’s drinking holes. I was particularly impressed by The Clarendon’s selection of real ales and its comprehensive coverage of live sporting events. It also has a large, sheltered beer garden – the only one in Clarendon Park – which makes it a great place for a drink or two on a sunny summer’s evening. 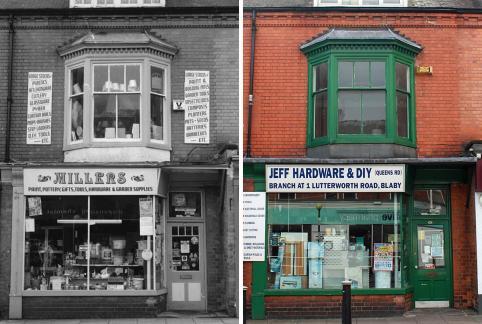 Millers hardware shop at 91 Queens Road has since become Jeff Hardware and DIY. This little place is an absolute goldmine of DIY and kitchenware supplies – for a small shop they pack a lot in and it’s well worth popping in to see if they’ve got what you need before schlepping over to Homebase or B&Q. 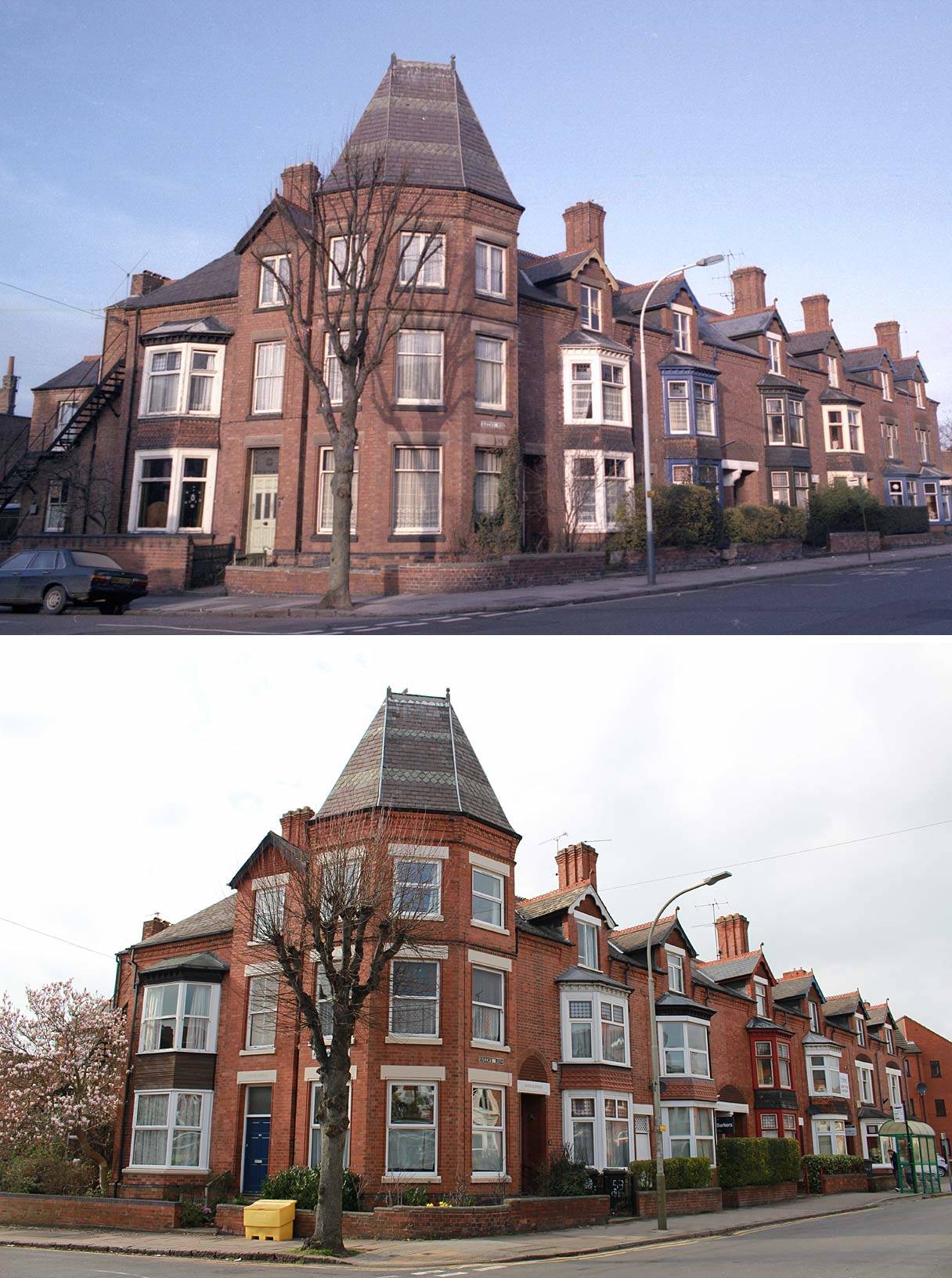 Proof that not everything changes! Despite having been taken around 20 years apart these two photos looking north at the corner of Queens Road and Howard Road are virtually identical. I know someone who used to live in a flat in this corner building. Not a great story that, but the best I can do for this one.


A tale of two bistros 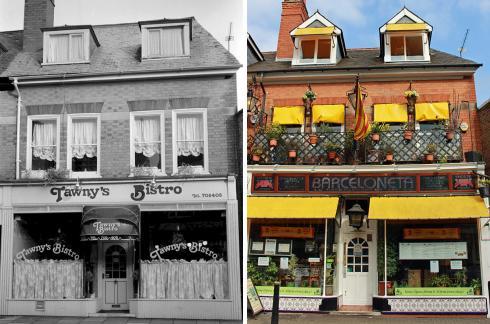 There’s something quite comforting about the fact that so many of the buildings on Queens Road have been used for the same purpose over the years, even if the business names have changed several times. Barceloneta opened at 54 Queens Road in 1990, and has been serving traditional Spanish dishes along with an extensive range of accompanying Iberian wines, liqueurs and aperitifs ever since. You can read my review of Barceloneta elsewhere on the blog. 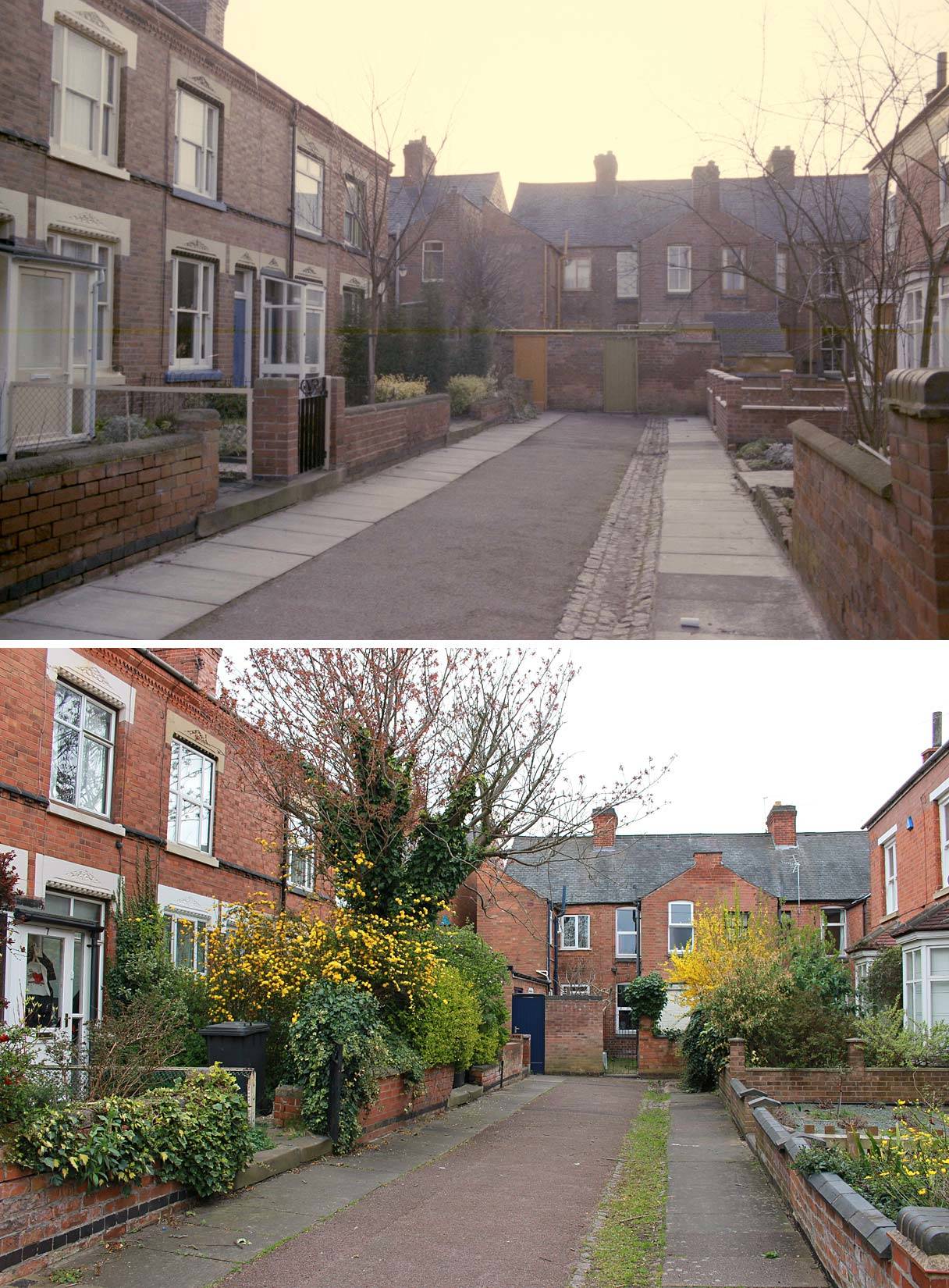 Orlando Road is one of my favourite little corners of Clarendon Park, and judging from these photos its pretty collection of houses has only grown lovelier over the years. William remembers the ginnel* which runs from the south-east corner of Orlando Road through to Cecilia Road, which is one of my own regular short cuts. Another benefit of passing this way is the possibility of bumping into Orlando the black and white cat, a particularly friendly feline resident!

*Evidence of my northern roots has crept into the above paragraph – I’m reliably informed that in these parts you refer to a narrow alleyway between two buildings as a ‘jitty’.

Pictured above are three shop fronts which I’ve been unable to place in modern-day Clarendon Park. The location of Queen Bee leather shop is a total mystery, although the name suggests that it was somewhere on Queens Road rather than elsewhere. William remembers Splash as being somewhere close to the junction of Queens Road and Howard Road. Meanwhile, the little antique shop was somewhere on Montague Road, perhaps between Edward Road and Oxford Road.

Do you recognise any of these mystery shops? If so, let me know using the comments box below and I’ll add them, along with the present-day view, to the next of my ‘Then and Now’ posts.

20 Responses to “Clarendon Park: Then & Now”