Stat lovers rejoice! Seriously – do a little dance – nobody’s watching. Yes – your favourite uber-local blog is here to brighten up your day with a smorgasbord of numerical trivia about Leicester’s classiest suburb.

From star-gazing gargoyles to record-breaking Easter eggs, brush up on your local knowledge with a dip into some of area’s most noteworthy dates, greats and weights.

1879
The year that the first houses were built in Clarendon Park. They’re likely to have been the first few terraced cottages on what is now Avenue Road Extension.

52°37’04″N 1°06’57″W
The latitude and longitude of the exact centre of Clarendon Park, according to Google Earth. It’s somewhere towards the middle of Montague Road. 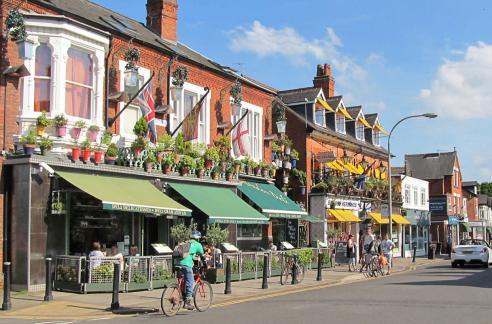 2 brothers
Bar Dos Hermanos, the name of Queens Road’s colourful Cuban-themed bar, means ‘Two Brothers Bar’ in Spanish. But hey, you knew that already, right? Did you also know that it’s named after John and Andy, the two siblings who own it? Yeah, thought so.

D4443
The serial number of the British Avro 504J biplane that crashed on a loft in the backyard of G. Swanns, painter and decorator’s shop, at the corner of Queens Road and Cecilia Road on 24 September 1917. No-one was hurt, but some unsuspecting chickens were killed.

1978
The year that Stoneygate Conservation Area Society was founded. It went on the protect some of Clarendon Park’s most noteworthy buildings. Members of the Society have been great friends of this blog over the years – thanks folks! 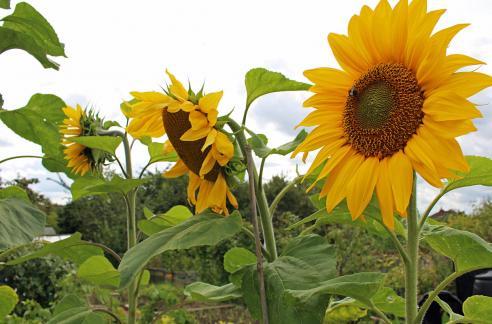 Good things come to those who wait at Queens Road Allotments

20 years
That’s the approximate waiting time for a plot on Queens Road allotments. Put your name down now and you’ll have plenty of time to hone your gardening skills while you wait.

500 bottled beers
That’s the choice on offer at The Offie on Clarendon Park Road. Perhaps the most unusual of the lot is Westvleteren, a Belgian monastery ale, which has no label and which the shopkeeper has to collect in person from the monks.

139 Queens Road
This building is currently occupied by Livingstone, an estate agents, but it started life as a police station and fire brigade sub-station. If you look at the building front-on you can see the narrow archway through the middle of the property which the fire engines would have passed through.

69 acres
The size of the magnificent Victoria Park, which we’re lucky enough to have right on our doorstep. Perhaps surprisingly, there are many smaller green spaces dotted around Clarendon Park, but some of them are quite well hidden.

11 and 12 Cecilia Road
What’s noteworthy about these two terraced houses? Well, there is a ‘secret passage’ which begins in a corner of Orlando Road and pops out in the middle of them. This little jitty is so narrow and well-hidden that very few people are aware of its existence.

68 years
That’s how long the Mittons family have been trading from their Clarendon Park Road premises, making their sizeable flooring and furniture shop one of the area’s most venerable retail outlets.

A quarter of a million
The number of oranges that have been juiced by Salvador Deli’s hard-working orange juicer. I’m reassured that the juicer is enjoying a well-earned retirement on a picturesque farm in Rutland following the deli’s closure last year.

Lyric Electric Theatre on Clarendon Park Road in the 1920s

64 Clarendon Park Road
Did you know there used to be a cinema in Clarendon Park? Now the Chinese Christian Church, this distinctive building was once home to the Lyric Electric Theatre.

£234,775
The average house price in Clarendon Park in April 2020, according to Zoopla. It’s just a shade over the UK average of £233k and reflects the diversity of different types of housing available in the area, from dingy student digs to blingy mansions.

19 East Avenue
Next time you find yourself in the Avenues, take a look at the roof of this dramatic detached property. There’s a ‘wyvern’ on the highest gable. This stone creature, halfway between a dragon and a gargoyle, adds more than a touch of gothic drama to the vista.

3kg
Feeling cheesy? This is the hefty weight of Christopher James Deli’s most popular cheese – the Black Bomber. This extra mature cheddar has won awards for its immense depth of flavour and smooth creamy texture. Do your cheeseboard a favour and treat yourself.

5 April 2014
The date that the first Clarendon Spark blog post was published – exactly six years before the last. I’m incredibly grateful to have had the opportunity to write this blog, investigate the history of this wonderful area and support its fabulous local businesses.

50
The number of Clarendon Sparticles that I’ve written and published on this blog. A massive and heartfelt THANK YOU to each of you who has supported Clarendon Spark over the last six years. Your feedback, comments and encouragement have been hugely appreciated.